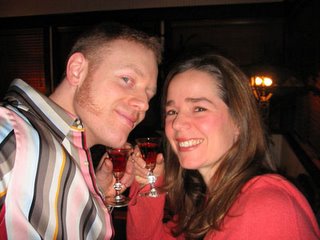 Here's a pic of us in Ashland as we toasted hopeful accomplishments for the coming months.

We zipped off to Ashland late last week for a pre-planned little getaway for some theatre, some sight-seeing, and (duh!) some romance.

Also, we find that long car rides work fantastically for collaborating on little stories and plots that we work on as side projects (after, of course, Laini's mandatory immediate car nap as I exit the driveway of our home). Long rides helped us hammer out our collaborative graphic novel THE DROWNED (www.thedrowned.net) as well as a few other things that are temporarily shelved until we can find the time to work on them. This ride was very helpful to me, in that I have written a plot and about 30+ pages of a story that I want to partially illustrate and eventually try to publish, but there were/are some story details that needed work. So, Laini and I talked out the plot and I THINK some new ideas were introduced that will allow me to get to the "meat" of the story a bit more quickly and compellingly. No details on it yet as it's going to be a loooong time in the making.

Anyhow, we saw "The Importance of Being Ernest," a play I knew just a little bit about when I bought the tix a few weeks ago (given as a Valentine's gift at dinner) but I knew enough about Oscar Wilde to know that it would be a fun production -- and it was! The acting, costumes, and sets were fantastic, by far the best play I've seen. (Okay, so I've only seen about a dozen plays or so, but I think this one will hold up for quite a while). Anyhow, I highly recommend Ashland and the Oregon Shakespeare Festival for anyone able to attend it. We're DEFINITELY going back this summer for an actual tale by the Bard in their outdoor theater (that theater doesn't open until June but the other 2 theaters have plays year-round!).

So, for some actual pix of Ashland and it's nearby old mining town neighbor Jacksonville, go to Laini's blog entry from the trip. But for weird, potentially blackmail-worthy pix of me that could definitely be used against me if I ever vie for political office, look no further: 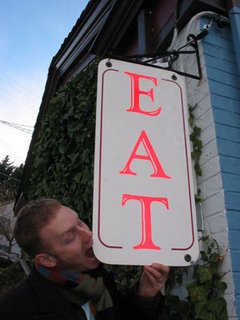 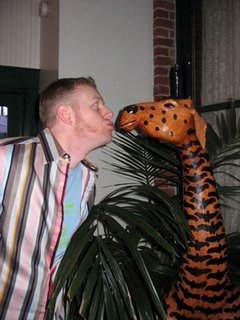 Now, as the title suggests, I've got to get back to work! In brief, I'm currently working for one of my favorite clients, White Wolf Publishing. I've done illustrations for about a dozen of their books and I did some RPG (Role Playing Game) cards for them a year or more ago. Anyhow, they're fantastic to work for and I'm glad that I've been tapped to do some more work for them. Currently I'm doing 5 paintings for their "VTES" (Vampire The Eternal Struggle) RPG set and it's loads of fun. With these I'm trying to go for more subtle portrait-like scenes for the 5 characters I've been hired to portray. Going too far over the top with some of the imagery could push the corny-factor a bit too much and I wanted them to be more subtley creepy. I'll post some eventually once I finish, but for now there's work to be done! :)