2 Seahorse Skeletons out of a possible 4 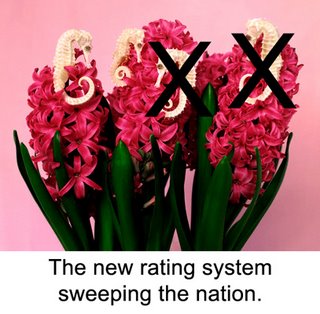 Yesterday was a day that should have had the power to suck the envy from every 9 to 5'er in a 20 mile radius like a CGI vortex. We got up early, walked the dogs and went out to an amazing breakfast at "Violet's Cafe." Laini had the chevre omelette special with a side of pancakes and fruit and I had the "Vampire Slayer" scramble also with the pancakes and fruit side. (By the way, anyone out there not wanting to order the "Vampire Slayer" scramble just once in their lifetime off of the otherwise very mundane menu should cash in their whimsy glands (everyone has 3 at birth), tearfully admit that they'll never be cool enough to own this shirt and call it a life).

We then headed out to see the new X-Men movie (of which, it should be noted, Laini was at least as excited as I was to see), sat in the theatre long before it started with our writing/sketching journals and prepared to be blown away by the third installment of what have been 2 of our favorite movies. 100 minutes later we watched the credits roll and both felt that all-too-often bland taste of mediocrity from yet another "Hollywood Blockbuster." While it wasn't a bad movie per se, it wasn't a good movie either. There was a fair amount of entertainment, but we both felt that even HUGE death scenes were missing the mark of causing the viewer to care all that much. Hmm. Crappy directors stepping up and becoming so-so directors just does NOT cut it for me. Sigh. And thus, "X-Men: The Last Stand," gets a piddly 2 Seahorse Skeletons out of a possible 4, making it more X-Meh than X-Men.

THEN, we went home, fully intending to get a ton of artwork & writing done, only to be washed over with a wave of malaise, coupled with the urgency to download the next episode of "Battlestar Galactica" that we hadn't seen yet (season 2.5 is only available by download). So, after LEGALLY doing that on iTunes and being BLOWN away by how much better that 43 minutes was than the gazillion $$ X-Men movie, we decided to try to further cleanse our palette of the X-Meh by seeing something that got pretty strong reviews: "V for Vendetta."

Sadly, again, while not bad, this movie was also "meh" in a lot of ways (cheesy dialogue, lame overly-bloody fights, and a heavy-handed attempt to bash the viewer over the head with comparisons between the movies corrupt political leader and a certain American leader whose name rhymes with "Moosh." So once again, 2 Seahorse Skeletons out of a possible 4.

Crap, we should have stayed home and watched the MUCH superior "Battlestar Galactica" all day long. Oh well, still better than a Friday spent handling automobile insurance claims (my pre-art-career job).
Posted by Jim Di Bartolo at 8:17 PM 9 comments: 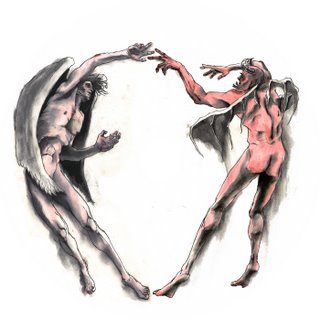 This illustration was done for the amazing Pacific Northwest band Floater several years ago. The album title is "Angels in the Flesh and Devils in the Bone" -- what a great freaking album that is. I was hired to do the art for the album's reissue. Doing the CD jacket art and the art for the disc itself was a lot of fun, but as a bonus the job introduced me to one of my now favorite bands (and a good friend in Rob Wynia to boot!). While all of their albums are quite good, my other favorite (so far that is, as they've just recorded a new one!) was their 2002 release "Alter." Like all of their albums, the songs were very different from one to the next, and within almost every song there's a shift from slow to fast & back again (or vice versa, if that makes sense?! :) I've probably listened to "Alter" a couple hundred times or more between 2002 and now, and each time I'm blown away at Rob's voice, the fantastic guitars, drums, & mixing, AND (maddeningly to me) the fact that they haven't graced the cover of Rolling Stone yet. Anyhow, check them out if you're unfamiliar, you won't regret it!

And while I'm on the topic of music, I've recently gotten into "Clap Your Hands, Say Yeah" (which I mentioned on a previous post), "Architecture in Helsinki", and "The Spinto Band." All of the bands I've just mentioned (including Floater) can be accessed through iTunes (and no, I don't own stock in iTunes -- so there!).

Lastly, some potentially good career news on a couple of fronts this past week or so (!!) -- um, unfortunately though, to speak about them now would be too premature, and while I don't believe in being jinxed per se, I do believe in the maniacally vengeful universe smiting people for counting their chickens before hatching, so... :) 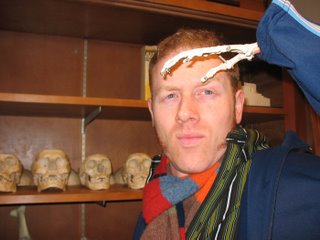 We recently returned from a very informative and inspiring weekend conference put on by the SCBWI (Society for Children's Book Writers and Illustrators) where we had the opportunity to attend keynote addresses by a number of industry professionals. I had the great fortune to meet almost everyone I wanted to, including a very nice designer from Hyperion, a (VERY talented) top children's book illustrator (and sometimes writer) G. Brian Karas, and an EXTREMELY kind editor from one of the major publishing houses. They were all very giving of their time and info, and I was lucky enough to be able to sit and chat with the latter gentleman for almost an hour while everyone else was attending another keynote address. The tips and kind words he offered really made my weekend and boosted my already inspired noggin. As Laini has said on her blog, conferences like these are invaluable for making contacts. Thankfully, all of these new contacts were amazing people to boot!

So, with the helpful input given and a bit of direction offered, I'm working on revising my children's book dummy as well as focusing on several oil paintings to help supplement my portfolio in a more children's book-type style.
Posted by Jim Di Bartolo at 7:55 PM 6 comments: