The topic this past week was "Robot." I promise I'll get to doing new stuff for some of these but there's a conference coming up that I'm trying to get drawings and paintings done for, so for now it'll be an old piece of mine once again. It's from a few years ago & I did it for a friend of mine & his book at the time (Jason Alexander's "Empty Zone"). As it turns out, he & the publisher "broke up" right before this illustration saw the light of day -- I hate it when that stuff happens! 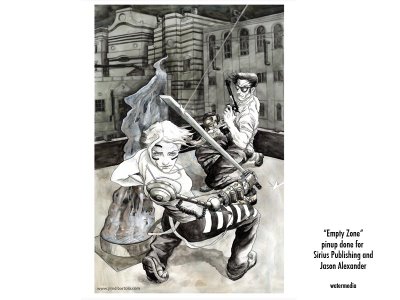 I've known about this site for a while now, but now that I'm blogging a bit more, I figured I'd finally go ahead and take part in Illustration Friday

Basically they're a site (similar to Sunday Scribblings ) that assigns a topic every week and you can either do an original piece of art for their topic or use an existing piece that you've done that applies. I'm going with the latter this week as I'm trying to get some art done for the children's book I've written and plan to pitch in the coming months. I'll try to do original pieces when I can, but I want to start taking part too, so, here's my piece for the topic "Speed." 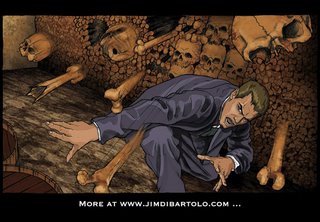 It's an image that's also on my website originally done for the FANTASTICALLY well-written ongoing comic book series Rex Mundi that I worked on for a couple of issues (14 & 15) last year. I left the book on my own after feeling that comic books weren't what I wanted to be doing right now. I'd become very good friends with Arvid (the writer and creator of the series) over the course of working on the book and he and I still chat often (and I also have the cool privilege of proofreading everything before it goes to press nowadays (a fun little behind the scenes assistance that I still get to take part in). Anyhow, for those of you interested, Arvid best describes it as "A quest for the holy grail, told as a murder mystery," and it's top notch! He's been putting the book out for almost 6 years now and he just announced the very exciting news that it's moving from Image Comics to Dark Horse Comics later this year. Both companies are great, but DH, from what I understand, has a bigger, broader distribution and more of a presence in bookstores so I really couldn't be happier for my friend and his awesome book.

Oh, and lastly, I would be remiss if I didn't mention that I used my friend Steve Murphy as a model for this piece. He was a great model when I photo'd him and I know he pops his head in here and peeks around from time to time (everybody say "hi Steve!" :) He's also a talented artist himself and maybe one day I'll convince him to get a website and blog of his own going!

Anyhow, thanks for stopping in!

Hey there! In writing my second Sunday Scribblings, I knew I didn't want to write about anything too terribly serious about real Real Life ("Real Life" being the topic of the week and all), so I've sidestepped it a bit and, well, see for yourself. (A bit of a warning though, this is probably a PG-13 story, and remember, I'm a boy, and boys sometimes like a bit of action... :) 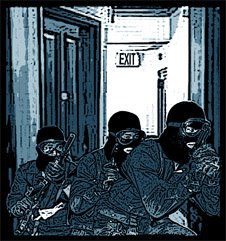 Round and round the men ran. Up and up they went until they were at the 12th floor. They’d stopped at nothing to get here. Horribly, they’d even killed to reach this man they sought, and they planned to kill him too.

In they burst, screaming and hollering, searching and, at last, finding.

Bruce was in his robe, chopping vegetables for a large soup he was making when he heard the front door burst in. The coffee was brewing, and the broth was at a boil. He was really in no mood for intrusions, as he already had his day planned. “Damn!” he thought. If his home wasn’t being remodeled, he wouldn’t even be in this apartment, cooking for himself like this.

In ran the first man, gun at the ready, yelling that he found him -- and then nothing. Silence.

“Johnny?!!” In ran the second man until he collided with the hurling knife.

Quickly, carelessly, the final man rounded the corner only to see his two partners lying on the floor. “Dead?” he wondered? And then he was falling, dropping his gun to land near his friend’s weapons.

He struggled and managed to roll on his back, his skin burnt from scalding chicken stock. He gasped when he realized he wasn’t looking at their intended target, but someone else entirely. “The wrong apartment!” he moaned and squeezed out the words “How? Who ... ?”

Bruce grinned a perturbed grin (“This is going to really eat up my neatly scheduled day” he thought to himself) -- “Pal, I’m Bruce. Who’re you?”

“This isn’t the movies friend, this is real life.”

Bruce Wayne then made a phone call, he had things to do and these bodies were in his way.

"What Would You Attempt If You Knew You Would Not Fail"

There's a brand spankin' new Blogger site called Sunday Scribblings that my wife Laini and her bloggy-friend Meg recently started. Basically, it's a place where anyone who so chooses can participate in writing about the topic of the week (which they "assign") -- pretty cool, neh?! The current (first!!) topic is "What Would You Attempt If You Knew You Would Not Fail." Well, I've interpreted it as if the "Knew You Would Not Fail" part was quite literal and all-encompassing, so, here it goes: 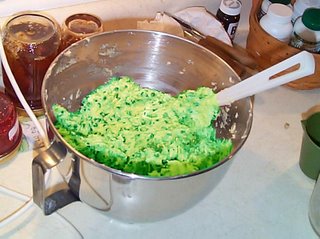 Knowing he would not -- nay, could not -- fail, Chemistry/Baking double-major grad student Studebaker Shoebox set out to invent that which would bring the world to its next phase. This invention would cause what mankind had only half-heartedly considered, that which the greatest minds of the past and present could only dream of: pizza topping that would immediately, upon creation, bring about world peace.

With ingredients in hand and mixing bowl at the ready, he plunged in, whirring and mixing, stirring and frothing, until at last, before him oozed his miracle.

Knives were sheathed, tanks were clicked off.

When people had a disagreement, they felt compelled to have a dance-off to settle their problems.