IN THE SHADOWS - press

Following the announcement of our book together, Kiersten and I were fortunate enough to get covered again in Publisher's Weekly in the "Rights Report" column.

Here's the text, followed by our pics and the link announcing our and other cool sounding books:

David Levithan at Scholastic Press has bought North American rights to Kiersten White and Jim Di Bartolo's In the Shadows, in a preempt. It was pitched as "Hugo Cabret meets Miss Peregrine," and the story is told "in an alternating narrative of words and pictures." Publication is scheduled for summer 2014. Jane Putch at Eyebait Management represented Di Bartolo; White was represented by Michelle Wolfson at Wolfson Literary. Film and foreign rights are controlled by Eyebait Management.

IN THE SHADOWS gets announced on Publisher's Weekly

Hello! So it’s been a long time in the making and has involved much secret-keeping whenever people have asked me over the last year or more: “What are you working on, Jim?” -- but the project has just been announced on Publisher’s Weekly!

and the press release lingo:

Levithan Preempts ‘Shadows’
For Scholastic Press, David Levithan preempted North American rights to Kiersten White and Jim Di Bartolo’s In the Shadows. Scholastic says the novel is “told in an alternating narrative of words and pictures,” and is a “spellbinding [tale] of love, mystery, and dark conspiracy.” White is behind the text and contributed to the story, while Di Bartolo is credited with art, and the story. The book is set for 2014. Agent Jane Putch at Eyebait Management represented Di Bartolo; White was represented by Michelle Wolfson at Wolfson Literary.

Basically, the book’s physical aesthetic concept is a combination of The Invention of Hugo Cabret and Miss Peregrine’s Home for Peculiar Children, but with some differences – most notably, it’s in FULL COLOR (insert the sound of whatever you imagine my voice sounding like saying “WOOHOO!” – now carry on reading, please).

And here’s the cover too (artwork by me and cover design by Scholastic’s Chris Stengel): 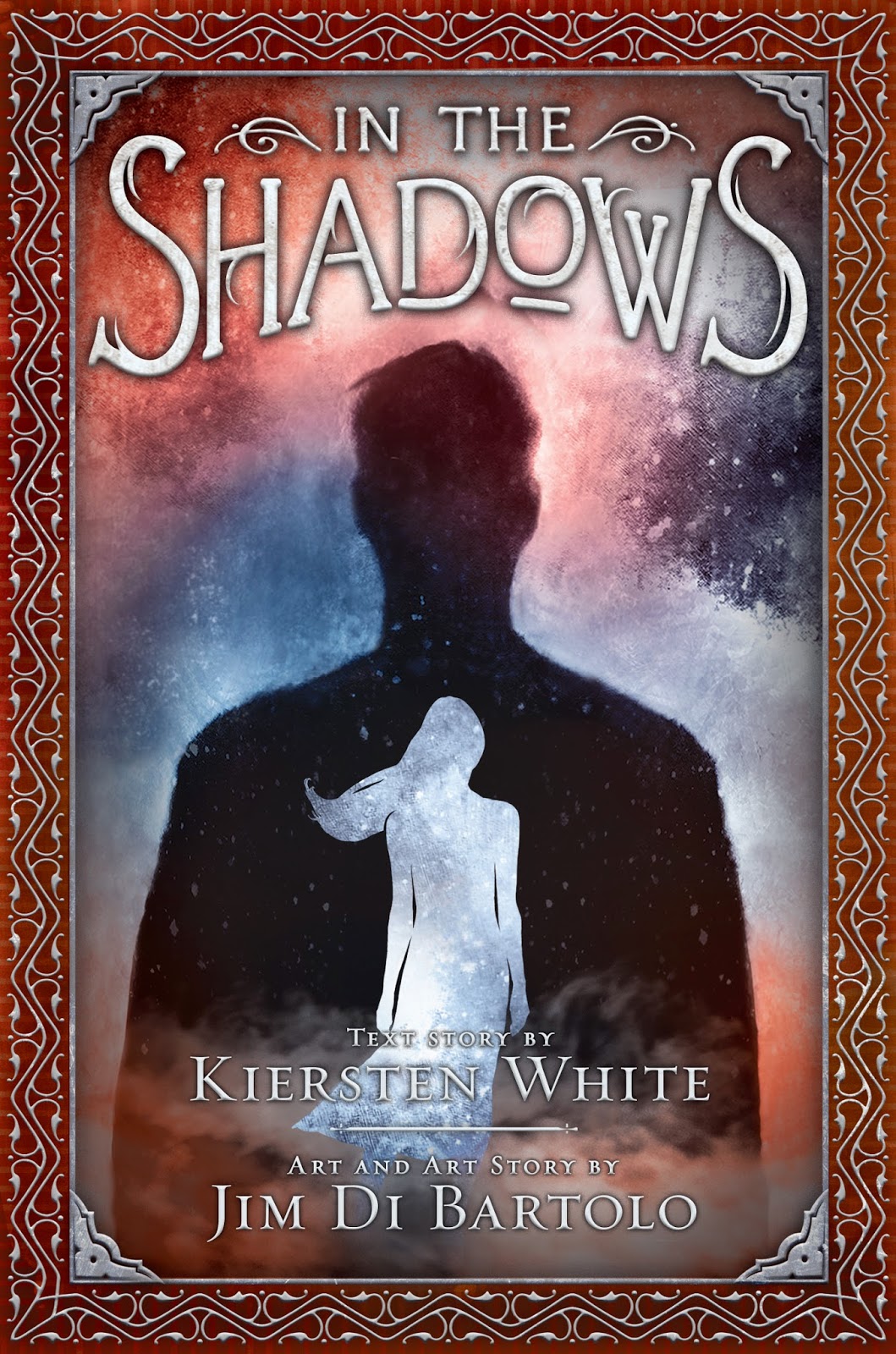 One of the most exciting things I have to say about the book is that it’s a collaboration with the sunburst-bright, creative dynamo, Kiersten White! Beyond being a New York Times Best Selling Author, Kiersten is not only a friend, but also a true gem to collaborate with. The poetic phrasings and graceful character moments she creates throughout the book have left me riddled with goose bumps even upon multiple re-reads. And some of the tense mysterious moments are written so lyrically & creepily -- they just leave me in awe.

As the cover states, she handled text and text story of the book while I handled the art story and artwork. And again, it's in FULL COLOR! That last part has been a constant joy for me over the past year or more as I’ve been either drawing or painting every day – both on most days. What else could an illustrator who wants to tell stories hope for?! I’ve long wanted to get back to doing more traditional painting (with some digital finishing touches where needed) so I feel beyond lucky to be able to do so in the pages of a book that I’ve co-created. It is without a doubt, the largest project I have ever been a part of, and needless to say, it’s been a true labor of love and passion project for us both and I couldn’t be happier or more proud of what we’ve created together.

Another one of the most exciting things was when we learned some months ago that David Levithan -- not only one of my music-loving-kindred-spirits, but also a powerhouse of an author and editor – wanted to acquire and publish our creation has been a constant thrill and honor.  Thank you David, and thank you Scholastic!

And of course, a big thank you to my agent and friend, Jane Putch.  You are the best!

So for now, those of us involved will remain a bit in secret about the book’s specific plot, or how it all works as a book, but as I am able to announce further details, I’ll be doing so here.

(*update*): Lastly, I should clarify, that the book comes out on April 29th, 2014, and you can pre-order it through Powells Books here, through Barnes and Noble here, through Indie Bound here, and through Amazon here.  Thanks for reading!
Posted by Jim Di Bartolo at 3:46 PM 6 comments: