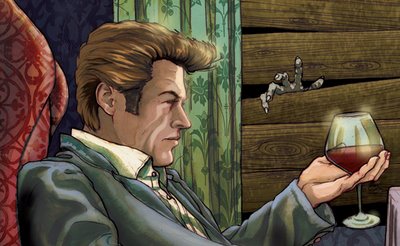 ...because MAN that show's awesome! It's surprisingly gory (given that we're living in a society that loses bladder control at the sighting of a woman's nipple) but if you can stomach some blood, it's been consistently intriguing and smart (in a nerdy sort of way). Check it out!

Also, I just finished another piece. It's a bit more adult/teen-oriented and I've attached a cropping/detail of it above. This one's a mixed media piece like the last few (watercolor, oils, digital-colors, & digital-collage). I'm trying to get another two or three done in the next week or so and I'll post at least one of them here once I finish.

Thanks for stopping by! 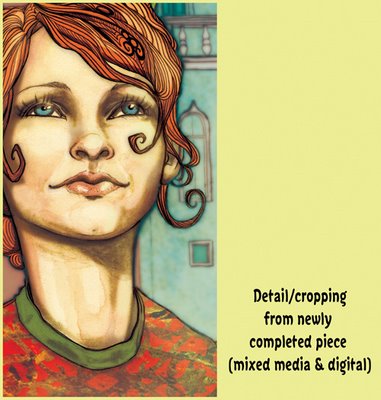 I was just finishing up this piece in the studio while Laini was painting patterns nearby and we had Air America's awesome Thom Hartmann Show on when the newsbreak came on at the top of the hour and randomly, oddly, uncharacteristically (!!!) mentioned a spoiler to a TV show that we download off iTunes. CRAP! I'm a huge spoiler-hater and have literally gotten pretty mad at people at times who jokingly spoil the end of a book I'm reading or movie I'm looking forward to seeing. (I mean, what the hell?!!)

Anyhow, at least today brought me to the conclusion of another new piece & that greatly overshadows any silly TV show spoiler. I'm only putting up a cropped detail of the piece for now, partly because I want to do a semi-big update on my website soon that'll "unveil" some new work, and partly because I'm not positive that the piece is 100% done quite yet. We'll see. 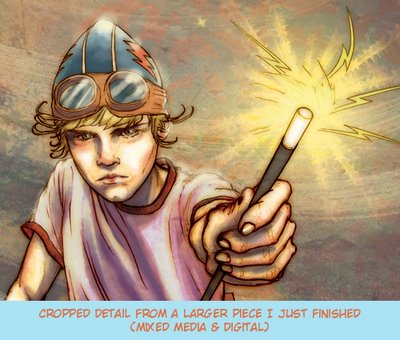 To answer the second part of this first (i.e.- which superpower would I choose) I have to say that the nerdy fanboy in me screams "Choose Wolverine's abilities!" Because the nerdy fanboy in me knows that those abilities include no illnesses ever, no risk of injury, and a vastly extended life (and some other things that mainly involve smelling things really keenly). Well, that last part with the extended life thingie would in itself give me more time to then get more done which is what I would mainly use Time Stoppage for. Plus, I could use my nerdy fanboy powers to fight crime (which yes, I would TOTally do). But anyhow, that's not what this scribble's about...

If I had the power to stop time, I would have to have some rules and stipulations to the power for me to want to use it very often. I would want to:

With this power I wouldn't rob a bank or anything hugely immoral. Instead I would go to some huge gathering of rich people and swipe $5 from each of them. Doing this sort of thing often enough would be like winning the lottery. (sweet!) Plus, I could Robin Hood some of that money to the poor. And of course, I would do all of the righting wrongs thing that I could, but for purposes of this blog, which let's face it, is a display of vanity in and of itself, I will focus on my selfish uses of the power.

And so, the main thing I would do while time was stopped is get LOTS of creative projects completed. Right now I've got so many ideas swimming in my head that it's hard to choose one or two to focus on without feeling like I'm neglecting the other numerous ideas. Also, when I get an illustration job I could stop time and POW send the Art Director a completed piece in what would seem to them like hours or a single day (depending on how much I wanted to wow them).

Ah, but as Laini said in the prompt, dwelling too much on this power does the opposite of being productive and just makes me unrealistically long for it too much. So, with that, I will commit to get even more of my personal projects done and continue to complete all of my illustration jobs before they're due.

*(edit: I added a caption to the illustration above to clarify that it is indeed some of my art)*
Posted by Jim Di Bartolo at 5:52 PM 6 comments: