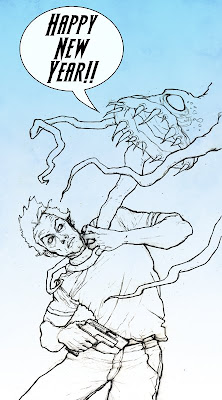 (P.S. - stupid time moves too quickly. That whole "Y2K" malarky seems way too recent to have been 9 years ago! Sheesh.)
Posted by Jim Di Bartolo at 2:31 PM 1 comment:

Marco Polo and a quick catch up 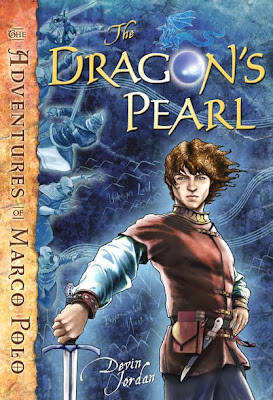 So this is the full front of the MARCO POLO cover I did for Simon and Schuster a couple of months back. The full image is a wrap-around. They've released the image on their website and on Amazon among others so I think it's safe for me to post it here. It comes out in May '09 and I'm really looking forward to it hitting the shelves! I had a blast working on it and I hope it does really well. Fingers crossed!

I can't post anything from the several projects I've been working on lately, but once things are released by the publishers I'll announce and/or post more work here. Until then, I'll just say that I'm working on some of the most fun projects of my career and I just feel very thankful right now.

I have managed to see a few movies and listen to some good music (the movies on our rare, quick outings, but luckily I can have music on in the studio to provide a soundtrack to my work day). Despite not kicking butt in the box office, Laini and I LOVED the following: RocknRolla, Let the Right One In, and Role Models -- all GREAT and each VERY different from the next. In fact, I'd be hard pressed to list three more varied movies if I tried. As far as music goes, I've been listening to "TOBACCO" a lot. Like a LOT LOT. Also "The Impossible Shapes," old albums and EPs from "Midlake," "Modeselektor," and "Tut Tut" (among many many others, but those stand out to me right now -- check them out!)

Lastly, since it's not going to appear in print anywhere, here's a snippit from a piece I did for...something. But again, it won't see print, so here's part of it. I'll put the whole thing and a lot of other new art on a big website redesign in the Spring once projects are farther along and ARCs (advanced reader copies) are released. Oh, and it's very mixed-media with some digital patterns and touches added at the end: 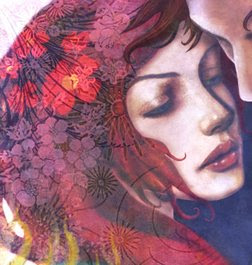 Happy Holidays everyone! Support your local artists and crafty-folks and small shops if you can. They make the best stuff anyway.
Posted by Jim Di Bartolo at 10:22 AM 4 comments: