You try to raise them right, and they still conquer and oppress you 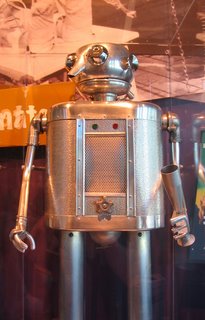 Laini and I just got back from OMSI (the Oregon Museum of Science and Industry) and their current Robots (!! yay !!) exhibit. The title of this post is actually swiped from one of the many billboard ads all over Portland where they have pics of robots with catchy phrases like that. Another funny billboard said "Humans are funny ... we'll miss you when we take over the world." I love those (only because they can't come true...right?). We met Laini's mom and our niece Izzy and her friend Chiara for lunch and some robot goodness. There was a (possibly unintentionally) funny movie playing on a loop there about one of the first computers that could do a number of computations at once and how it was over 40 feet long and weighed 30 tons. I wonder how much our grandkids will laugh at us with our iPods and DVD players...

While we were there I made a friend: 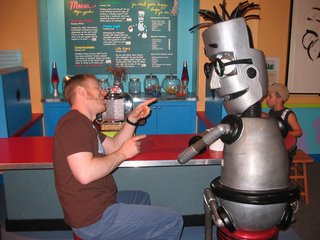 ... but then he got a little clingy and weird: 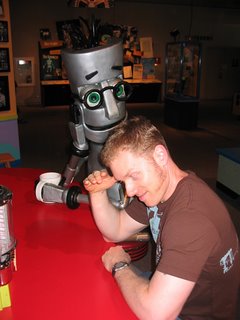 And for those of you who'd read my last post, check out what "mysteriously" showed up at our house last week ... 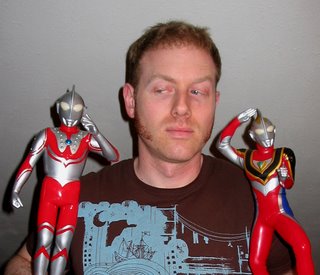 GREAT News and a Childhood Flashback 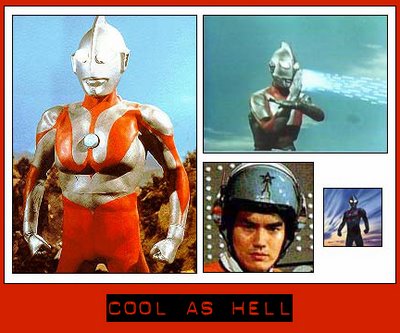 I know it's been a while since I've posted, but I promise I've been busy. Really! Some of you may already know by reading my wife's blog that she is finalizing the editing of her first novel as I write this! The book doesn't come out until next Spring, but it'll be worth the wait because she's just a fantastic writer. Thankfully, her editor has been supportive of the idea of me or us (Laini and me) doing the cover and interior artwork for the first book as long as whatever I or we came up with could get past the (BIG!) hurdle of getting the artwork approved by the Publisher, the Art Director, the Marketing department, and the Sales department. As it turned out, Laini's been WAY too busy to do the art herself, but I told her to art direct me if she wanted, as this is, after all, HER book. Anyhow, after a few weeks of hard work and a handful of sleepless (work-filled) nights, the cover pitch I designed was okayed and I was officially hired last week! Sadly, I can't show any of the work here because of publishing legal-type stuff, but I was really pleased with how the cover turned out since it's slightly more design-oriented than much of my work, and a bit different style as well. So, in addition to the cover, I'm also doing the chapter-heading spots and possibly a thing or two more. Some of you great blogger-kids have already congratulated me (THANK YOU!), but I figured this was indeed big news that I should share on my own little blog. Exciting times indeed!

Amidst all of this, these past few weeks I got into a few conversations with people about childhood TV shows that were addicting as we grew up. For me, 2 of the shows that I LOVED were the "Ultraman" show and the "Spectreman" show. These were basically very cheesy, but awesome nonetheless pre-Power Rangers type shows made in Japan and dubbed over here to the great pleasure of many a kid. In fact, when I brought up these characters with a few friends they flipped out and started rattling off details I hadn't thought of in decades. Describing the opening scenes with the credits, the villains, and TONS of other details that were buried deep in my wee head. For those of you not familiar with the characters, I BET you have a loved one in your life who was at the very least, aware of these shows & characters, if not completely IN LOVE with the corny-goodness. Both of these guys (separate TV shows btw) shot rays out of their hands, could fly, AND could grow from human-size to upwards of like 200 feet -- in other words: cool as hell!) Here are a couple shots of Ultraman: 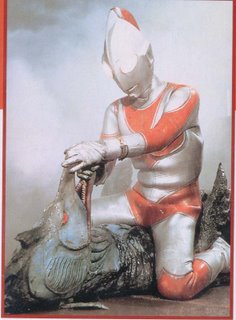 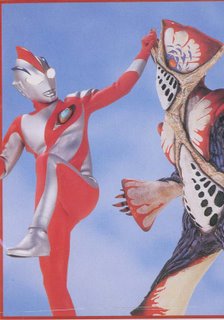 And a couple shots of Spectreman (and it should be noted that I dressed up in an AWESOME Spectreman costume that my amazing Mom made along with me for my 3rd grade Halloween. I even won a costume contest that year!): 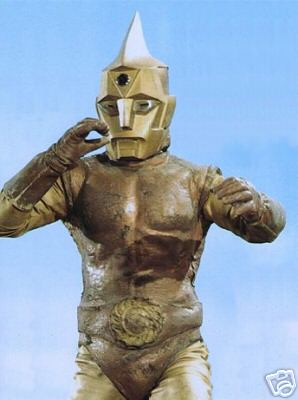 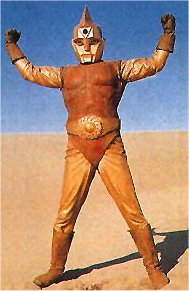 It should ALSO be noted that Laini thinks these guys look really lame, but I freaking LOVE them. My slight touch of OCD has freakily kicked in and I'm almost positive that a poseable action figure (they're NOT toys dammit!) or two will be making it's (their?) way to my area of the studio soon. I bet if I told Laini that it was somehow tied into "Pride and Prejudice" (Mr. Darcy's alter-ego IS Spectreman!), she'd somehow find a way to back-pedal and admit that she actually thought these guys were pretty sexy. :) Also, these guys should totally NOT be made fun of. Do you people even REALIZE how many times they've saved the planet between them?!!! If it weren't for them we'd all be overrun by evil alien masterminds AND 200 foot tall monsters! Hello?! A little gratitude please?!
Posted by Jim Di Bartolo at 9:22 AM 7 comments: