Shirts, shirts, and other items...and shirts! 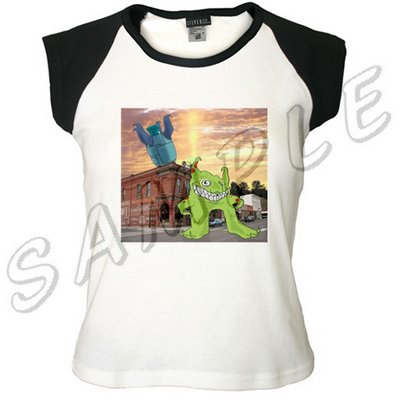 I thought it might be fun to do some designs on t-shirts as I've become interested (some might even say obsessed :) with finding cool/funny/hip t-shirts for myself and Laini. So, after coming up with a few designs, I opened a little Cafe Press store to carry some apparel and other items with those designs. There are 3 images to choose from so far (including the one shown above). I'll probably be adding some more options eventually, but I thought I'd share what I've got at this point.
Posted by Jim Di Bartolo at 10:25 AM 3 comments: 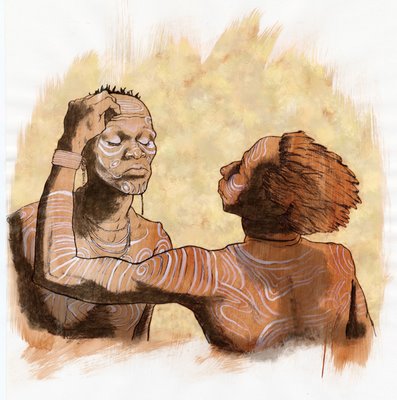 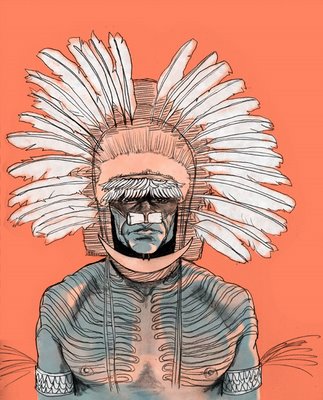 I've been perusing some cool books I checked out from the library this past week in researching a project that might be in the works, and decided to post a couple of the practice pieces I did tonight. These are images I've drawn and painted from the beautiful photos in one of the library books. Doing practice art gets me inspired to really dive into a project.

More specifics about what I'm (possibly?) working on if anything starts to really happen...

Thanks for stopping in!
Posted by Jim Di Bartolo at 12:57 AM 4 comments: 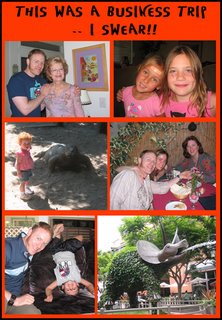 Laini and I got back from a thoroughly inspiring trip to Southern California last week where we (in no particular order): attended the fantastic SCBWI (Society of Children's Book Writers and Illustrators) conference, visited with Laini's grandfather and cousins, went to the zoo, perused galleries and restaurants with our agent, visited my mom, 2 of my sisters, a niece and a brother-in-law, AND got addicted to a hilarious Podcast. And as the pic above states, this REALLY WAS a business trip!

Briefly here, the SCBWI is such a fantastic organization and I'm SO glad to belong to it. There have been such great encounters with other talented creative folks wanting to publish writing or art AND I've gotten the opportunity to meet such sincere, kind-hearted professionals (from writers and artists to Editors and Art Directors). Seriously, if you're wanting to get involved in a creative industry go to their conferences! Most creative professions have large conferences and I urge all those wanting to get serious about their dreams to JOIN the groups, ATTEND the meetings, and be social while you're there! I've learned that many of the "Big Time" pros are some of the nicest people too (that must have something to do with their success me thinks! :)

Now as to the Podcast I mentioned, for those of you who have seen the British version of "The Office" on the BBC or "Extras" on HBO, the hilarious Ricky Gervais records little conversations with his co-creator Stephen Merchant and their producer Karl Pilkington. I was laughing so hard in the airport and on the plane at times that I feared others must have thought I was nuts. Ah well, it was worth it not to hold the laughter in & pull something. The show can get a tad bit mean-spirited towards Karl, but I'm convinced that it (Karl's personality and the teasing that ensues) MUST be a bit of an act -- for those familiar with the Podcast, I'd be curious to know your thoughts about that.

Lastly, a big hearty THANK YOU (!!!) to everyone who offered such kind words and support for my last post. I was very touched to see such nice responses and I appreciate them whole heartedly! I hope the cover grabs people's eyes on the shelves! Fingers crossed :)

P.S. - By the way, that giant lizard next to my niece Grace in the photo above is a sculpture (but she didn't know that at first until my sister/her mom jumped on it and rode it like a bucking burro. I must say that Grace's first reaction when she saw it was pretty funny though :)
Posted by Jim Di Bartolo at 8:30 AM 5 comments: 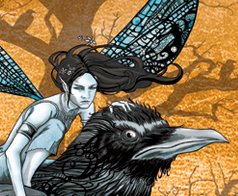 Just a quick post to show a clipping of one of the things I've been working on for Laini's upcoming novel! It's a portion of the cover, and a larger portion of the wrap around jacket art can be seen at my website's home page. The book is titled "Faeries of Dreamdark: Blackbringer" and is the first (in a series of 5) coming out in mid 2007 from G.P. Putnam's Sons. I'm finishing up some of the interior artwork and will be posting that as well on my website once it receives the "ok" from the publisher.

For those of you who have expressed congrats over the past few months, I appreciate your support and well-wishes! I can't wait until everyone else has gotten the chance to read her fantastic book!