Painting away and discovering Faunts and White Flight

It's been a while, but I've been busy and I LOVE it! Since I can't show you what I've been working on, I can at least show you (along with some blurred-out-art areas) my work space: 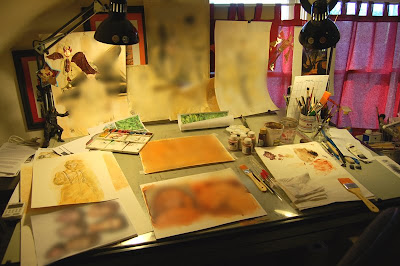 By the way, that drafting table has been THE BEST purchase I've made in a long time. My old table was about 3 feet wide, and while it served me very well over the years, this "new" one has been incredible. I say "new" because I got it off of Craig's List in the early Fall for $100! I'd been keeping an eye out for a while for just this kind of table and after seeing them pop up and then disappear within hours I POUNCED on this one when it showed up online. It's an architecture table with drawers and it's as sturdy as hell! I was tired of my old table squeaking and getting semi-wobbly if I didn't tighten it every couple of days and this new one is solid enough to climb up on and take a nap. And once I got it home and realized that my old chair wasn't high enough, what did I do you might ask? I jumped back on Craig's List and within a couple of days I found a used (nice!) drafting chair for $10 that was missing some screws. One stop off at the mom & pop hardware store on the way home and it was as good as new. Anyhow, enough pitching for Craig's List. It was actually kind of fun at first, working without the chair and drawing standing up (but it got old pretty fast leaning over the table). I've already posted this a while back, but here's one of the pieces once again that I did on my feet & hunched over: 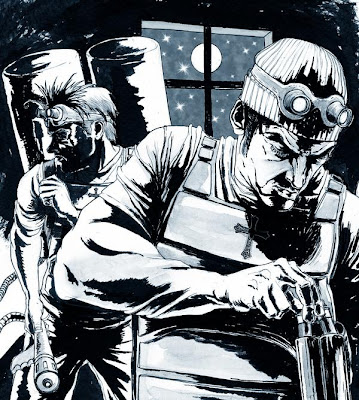 Now on to music. I'm an eMusic monthly subscriber (LOVE. IT.) and I had some credit that was itching to get used this past week. At first I wanted to find a few songs from some obscure bands (to me at least) that were in the "My Bloody Valentine" realm. Someone I'm working with had mentioned his enjoyment of that band and I've been wanting to make a mix for him, but I ended up LOVING a few of the bands myself. For today I'll only mention Faunts and White Flight, and while I'd never seen their videos before, I thought these were pretty good. It's funny because as a child of the '80's, I TOTALLY got into music videos growing up, but since I haven't had cable TV in over 10 years I sometimes forget that there are still videos being made. Anyhow, if you're interested, here're the Faunts with their video to the song M4-Part II. (Crabs at war? Strangely sad) :

And here's White Flight with the song Pastora Divine:

And because this video is just a bit too fun and cool NOT to show, here's another one (it takes a minute for the song to start, but it's a little too much cheesy goodness to look away in the meantime. I think so at least) :