Here's the full cover to issue #6 (I'd posted the girl running a while back but now that solicitations are out I figure it's safe to post the whole thing...). And here's a panel from inside the book featuring the same little girl-- what's she peeping on through the keyhole? ...
Posted by Jim Di Bartolo at 8:42 AM 4 comments:

Hey, it's been a while eh? Sorry about that! I'm hard at work on the upcoming fill-in issue of Rex Mundi I'm doing with Dark Horse Comics and some vampire gaming cards for White Wolf Publishing, but I managed to squeeze in a few color cover roughs for a project that I was approached about last week (but I sadly didn't land the gig -- too bad, it would have been fun! But it was a great experience regardless, so no harm done!). Anyhow, while I don't think I can say what it was for, I think I can show you the roughs I did (they're at varying stages, the first at a more complete (yet still unfinished) stage, and the other 2 much looser). Anyhow, blah de blah, here they are: 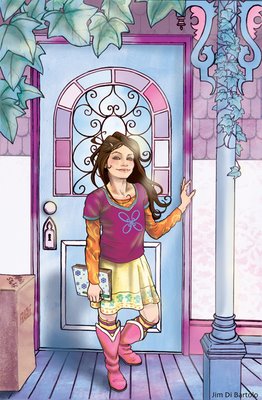 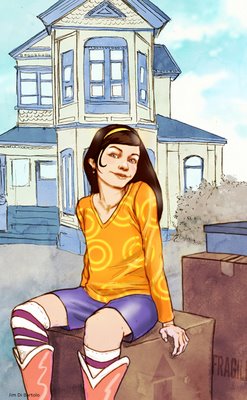 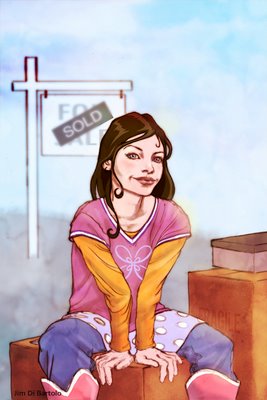 I've also been doing some illustrations for a book of short stories by my beloved. Here's a close-close-up detail snip-it of one of the illos: 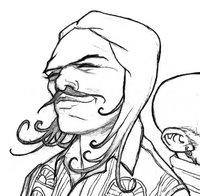 Also, the talented husband of our awesome friend (blog and otherwise) Jennifer has been working on remodeling our kitchen! He's been doing an AMAZING job and it's almost done. Man o man has his handiness been a Godsend to us! :) 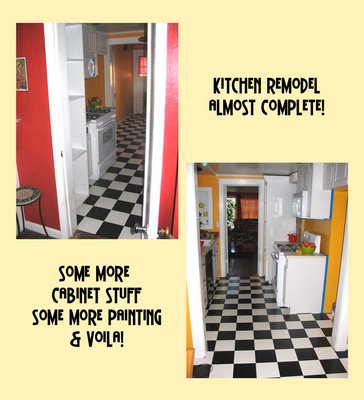 We had initially wanted some pattern for the floor, but once we saw how lame the selections were and then saw the checkerboard (!!) it was like the decision was made FOR us! We LoOOOoooOOOOooove it! (if you disagree, send your complaints and opinionated rants here)

And lastly, Laini pointed this VERY flattering post out to me on the hugely popular Fuse #8 site. I'd like to say that I'm humbled by her kind words, but since I'm so "hot" it's hard for me to reflect inward like that (what with all of the mirrors in our house, how can I make time to ponder my own humility? I'm too busy being "hot!" -- yeah right! :) Thanks for the kind (and skewed!) words Betsy! You're being VERY generous there, but thanks for the inclusion :)

I'll try to be better about updating more regularly here. I'll see what I can do about posting some vampires & the like as I work on them.