Since the last few days of August until now it seems like we've been extra busy. While Laini's been doing her final revisions for Blackbringer, I was finishing a title page illustration for the book and getting some art and a proposal letter together for a local (very hip) gallery that's having a group show in a few months. I won't know for a while the results of that proposal, but I've got a few other projects in the works to keep me busy if that doesn't pan out.

But as I mentioned, we've been busy lately, but not just creatively. We had one of my best friends (Arvid, the writer/creator of the comic book Rex Mundi (which I did the art and coloring for last year) and his awesome girlfriend Robyn in town from NY a couple weeks ago. They'd never been to Portland before, so we took them around to some of the highlights (Hawthorne street, Powell's Books, Edgefield, the Gorge, the Alberta Arts District's "Last Thursday" street arts fair, the zoo, and a few other places). We weren't able to take them everywhere we would have liked, as they were only here for a little over 2 days, but Arvid and I still managed to save the world. Here's a glimpse of us in action: 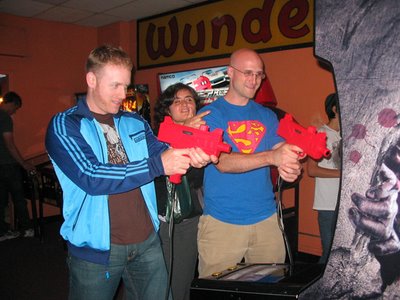 It should be noted that I haven't played video games in AGES. I used to have a Super Nintendo in college and I realized then that I become WAY too addicted for my own good. That was the last video game system I've ever owned because of that realization. When Laini and Robyn saw us pour money into the game time and again I could see the fear growing in Laini's eyes (or I'm sure I would have if I would have looked up from the game long enough -- but COME ON MAN! YOU CAN'T LOOK AWAY! FREAKING ZOMBIES ARE ATTACKING YOU! I mean what else you gonna do but shoot them all?! Sheesh!). Here are a few pix of all of us hanging out with two of our local friends Matt and Jade: 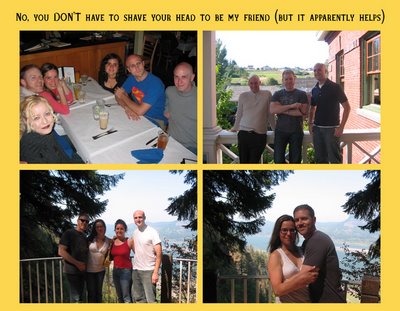 Matt's a very talented illustrator who's collaborating on an upcoming Dark Horse comic book with Arvid, and Jade owns and runs her own publishing company, Cellar Door Publishing. Theirs is a household of creativity (like ours!), as Jade is a talented writer in addition to her indie publishing company. They're the best.

Anyhow, we had a great couple of days with our houseguests and local friends :)

In preparation of our houseguests, we did one of our most dreaded, but necessary, cleaning duties:

And finally, in needing to replace the overflow pipe in the watercloset portion of the toilet yesterday, I went to Home Depot to tackle it myself. Well, that one part turned into a whole new toilet (as our old one (!!**TOO MUCH INFORMATION ALERT**!!) was so old it was possibly an antique). And since I knew I'd have to turn off the water to the house, I figured I'd better get a new faucet (and sink, and install a cabinet beneath the sink. Oh, and replace the medicine cabinet...$$$ sigh $$$). Well, none of it was in horrible shape, but the cabinet covers the exposed plumbing that uglied up the room, the new medicine cabinet is a better alternative to the %^&* one that was there before, and we'll experience WARM water in our bathroom for the first time ever! (it's been either cold or hot ONLY since we moved in -- sheesh!). Now, before I get jumped on for letting stuff like the lack of warm water go unresolved for so long, just realize that it's ALWAYS a hard choice to give up an entire day (and lot's of this stuff: $$$) instead of doing art, so go easy on me. Anyhow, check it out!: 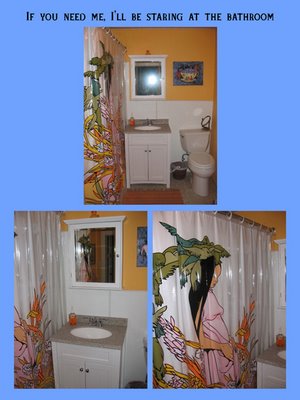 And if you think that caption is exaggerated . . . you'd be wrong. I'm actually typing this as I stare at the new bathroom stuff (just kidding -- or AM I?...). Oh, and lastly, that shower curtain was purchased at (of all places) an art gallery. It's the artwork of the very hip artist Sam Flores and we LOVE it.

This has gone on long enough! THE END
Posted by Jim Di Bartolo at 9:33 AM 6 comments: